Solar at Gesu Detroit: Made Possible by the Students - Michigan Interfaith Power & Light

Solar at Gesu Detroit: Made Possible by the Students

In 2018, Gesu Catholic School in Detroit installed a solar panel array on the roof that saves them thousands of dollars on their electric bills each year. How does an underfunded school with a 97-year old building manage to make that happen?

It started when Anita Sevier, Development Director at Gesu Catholic School in Detroit, gathered 10 elementary-school students to research solar power and enter the My Solar School Contest. Anita and the students’ story struck a chord, and by sharing their story, Gesu Detroit’s 6 acre campus is not only more sustainable to maintain cost-wise, but also for our planet.

“To get things done, talk to anyone who will listen. Tell your story.” – Anita Sevier, Development Director at Gesu Catholic School in Detroit 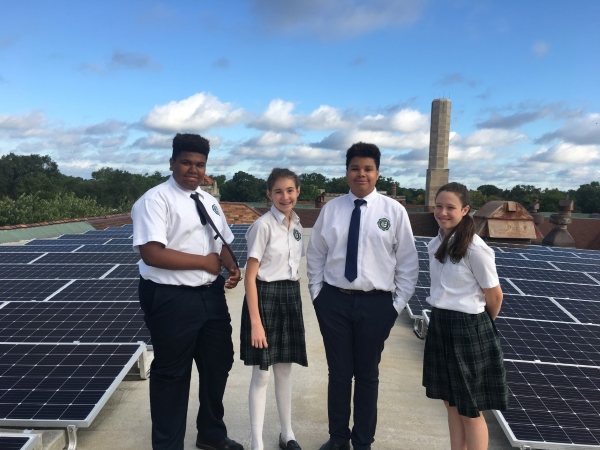 After raising money and awareness for solar panels, members of the Gesu Detroit Solar Club stand next to the new solar panels on the roof of the school. Courtesy of Anita Sevier/Gesu Detroit

While doing research for the My Solar School Contest, the students were surprised to find that Detroit residents had significantly higher rates of asthma than the rest of the state. The rates for kids with asthma in Michigan was 8.4%, while the rates for lower income kids in Detroit was 27%. This fact resonated with them because 4 out of the 10 students in their club had asthma. “Finding that statistic about asthma in Detroit inspired them,” Sevier comments. The consequences of burning fossil fuels were personal now.

“We discovered that air pollution is the third leading cause of asthma,” explain the Solar Club students in the My Solar School Contest video. “By adding solar power, we can hopefully reverse this trend.” 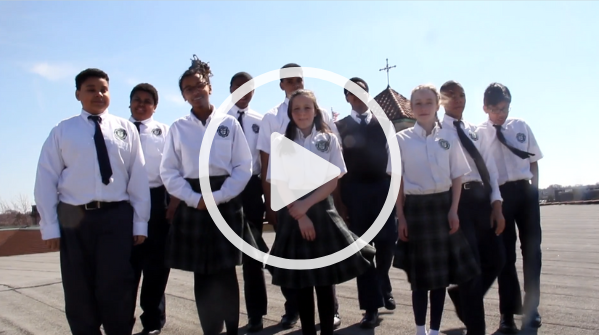 Gesu Detroit placed 3rd in the state in the My Solar School Contest and received $500 towards a solar array. Installing a solar array, though, would take a lot more money. The Solar Club students gave a presentation to Ford and UAW executives who loved it so much that they offered to match Gesu’s fundraising for the project. Gesu raised $250,000, matched by Ford and the UAW, for a total of a half a million dollars, which paid for a 24kW array, the electrical updates needed to run it, as well as other school projects like improved drainage symptoms.

“To get things done, talk to anyone who will listen. Tell your story,” Sevier tells me. “Some people will say no, or say what you’re doing is impossible, but if you keep pushing forward, sometimes things have a way of falling into place.”

Now, Gesu Detroit gets 26% of its electricity from the solar panels during the school year and 56% during the summer months. “Ever since we installed the solar panels, the kids pay attention to sunny days,” Sevier said about the impact of the project.

Gesu has continued to make improvements to the school, including remodeling their courtyard. Their courtyard was formerly filled with concrete, and when it rained, the runoff would go right into the sewer. This is a problem during heavy rains because Detroit’s combined sewer system—which processes household sewage and stormwater runoff together– becomes overwhelmed and releases untreated sewage into our waterways. After removing the concrete and installing planters, downspouts from the roof direct the rain into planters and rainbuckets, which also saves Gesu money on Detroit Water and Sewer Department’s monthly drainage fee.

Since installing the solar panels, Gesu has continued to educate the community about sustainability practices through activities ranging from field trips on the roof of the school to informative bulletin boards in the church and hands-on experience with native plants for students. Coupling education with practical projects allows Gesu Detroit to maximize the benefit of their projects by promoting awareness and, in time, motivating action.

Gesu’s efforts to make the campus more sustainable started with Pope Francis' encyclical, Laudato Si’ when one of the nuns led a study group. “After reflecting on and discussing the encyclical, members of the parish were inspired to create a Green Team,” Sevier says. “We realized we could do more, and that’s where our story began.”

For Catholic churches and organizations interested in Laudato Si’ resources, the Laudato Si’ Action Platform provides education and a community around “empowering all to take “decisive action, here and now” as we journey towards a better future together. (LS 161)”

or
Please check your e-mail for a link to activate your account.
Get Emails Donate Member Center
Subscribe with RSS