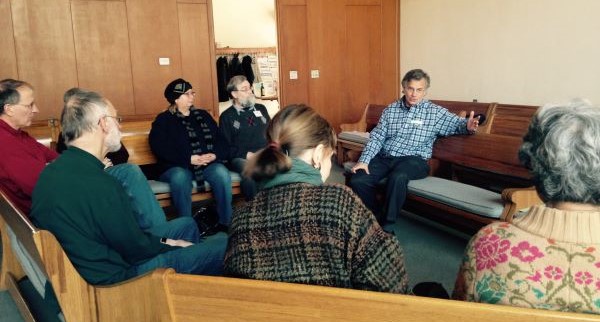 The idea for the voluntary Carbon Tax started when some of the Friends Meeting members got together and formed a Carbon Interest Group that met periodically and discussed how each member contributed their carbon footprint. “It was enlightening to see how much carbon we consumed,” said John Williams who participated in the early discussions and is a current member of the Earthcare Committee. “We took steps to reduce our energy usage- some members even installed solar panels on their roofs. For the rest of the carbon that we produced and hadn't found a way to cut back on, a few individuals had the idea to donate money for climate action."

From there, the group decided to calculate the Carbon Tax based on the social cost of carbon dioxide, or how much money it would take to remediate the damage. Currently, the social cost of carbon dioxide sits at $50 per ton and the average American generates about 16 tons per year. The voluntary nature of the Carbon Tax allows members to contribute as much as they can, either based on their calculated footprint or a general amount that they feel is appropriate. “The way we have it set up is very flexible,” John said. “The Carbon Tax program could be implemented at many different congregations, and members feel good about it too.”


“The Carbon Tax program could be implemented at many different congregations, and members feel good about it too.”

The Ann Arbor Friends Meeting’s Earthcare Committee was deliberate in allocating the funds from the Carbon Tax to address social injustice as well. “The people who are suffering the most from climate change are economically disadvantaged,” John explained. “We've all learned that there is not going to be environmental justice without social justice. For example, the US produced more CO2 than any other country over the past 100 years, but people in small island nations are going to suffer even though their average carbon footprint is significantly less than ours.”

Oftentimes there is not enough support or discussion for how smaller or more economically disadvantaged houses of worship can make a difference. Even if changing out lights and installing solar panels will save money down the road, the upfront costs are barriers to many congregations. That’s why Michigan IPL offers a Carbon Fund, which is in part supported by the Ann Arbor Friends Meeting Carbon Tax.

Michigan IPL’s Carbon Fund provides mini-grants up to $5,000 to organizations with financial need for reducing their climate pollution. “Our Carbon Fund has been used for amazing projects which continue to help underserved communities,” Leah Wiste, Director at Michigan IPL explained. “We’re hoping to get even more applications and donations in 2022!” To donate to or apply for the Carbon Fund, visit the Carbon Fund page.