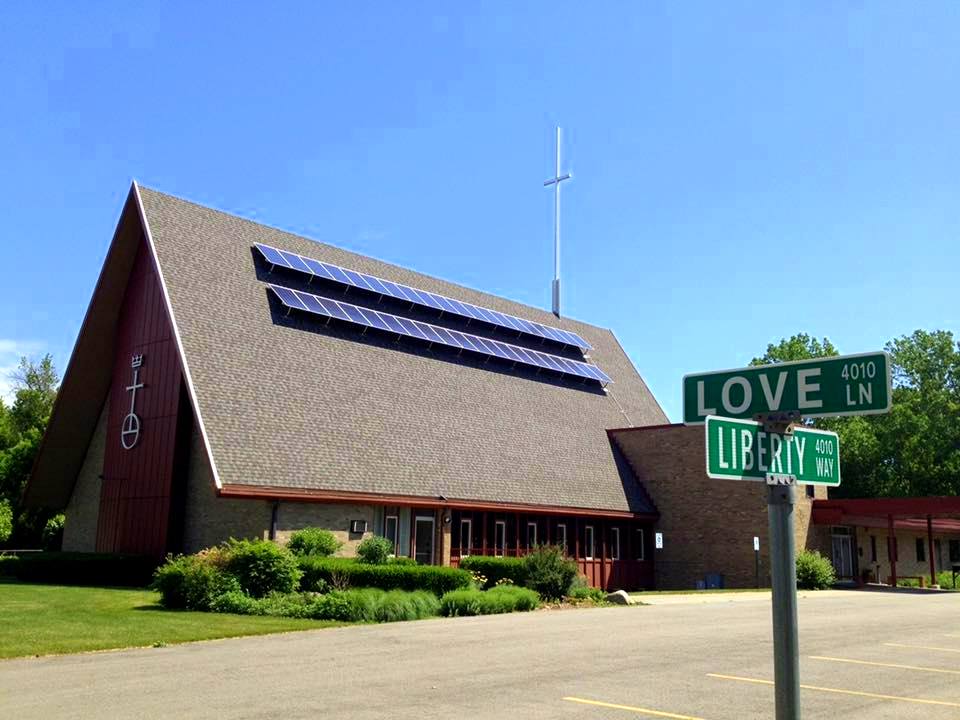 Why not install solar?

Plymouth United Church of Christ’s (Grand Rapids) Justice and Peace Task Force had been casually talking about installing solar power for a few years. But it wasn’t until the church faced the pressing need to replace its 55-year-old roof that the idea finally gained traction.

The sanctuary roof had visible deterioration of the shingles and was quite energy inefficient, with a high pitch and no insulation. Given these factors, the moment seemed right: If the church needed to launch a capital campaign and manage a significant building upgrade anyway, why not also demonstrate good stewardship for the earth and save the church on energy costs in the long run?

At the same time that roof bids were being gathered, representatives from the Task Force and Plymouth UCC’s Board of Trustees formed a committee to look into the solar option. The committee met with and sought information from numerous sources: solar power contractors, the West Michigan Environmental Action Council, an environmental attorney, coordinators from other church solar installation projects, Consumers Energy, the Michigan Alternative and Renewable Energy Center (MAREC) of Grand Valley State University, and companies that finance solar installation projects. In addition, they consulted with Michigan IPL and attended one of our Sustainability Workshops.

Plymouth UCC really did their homework, and it paid off! They identified an experienced local contractor, Solar Winds, and were able to obtain a very competitive price. 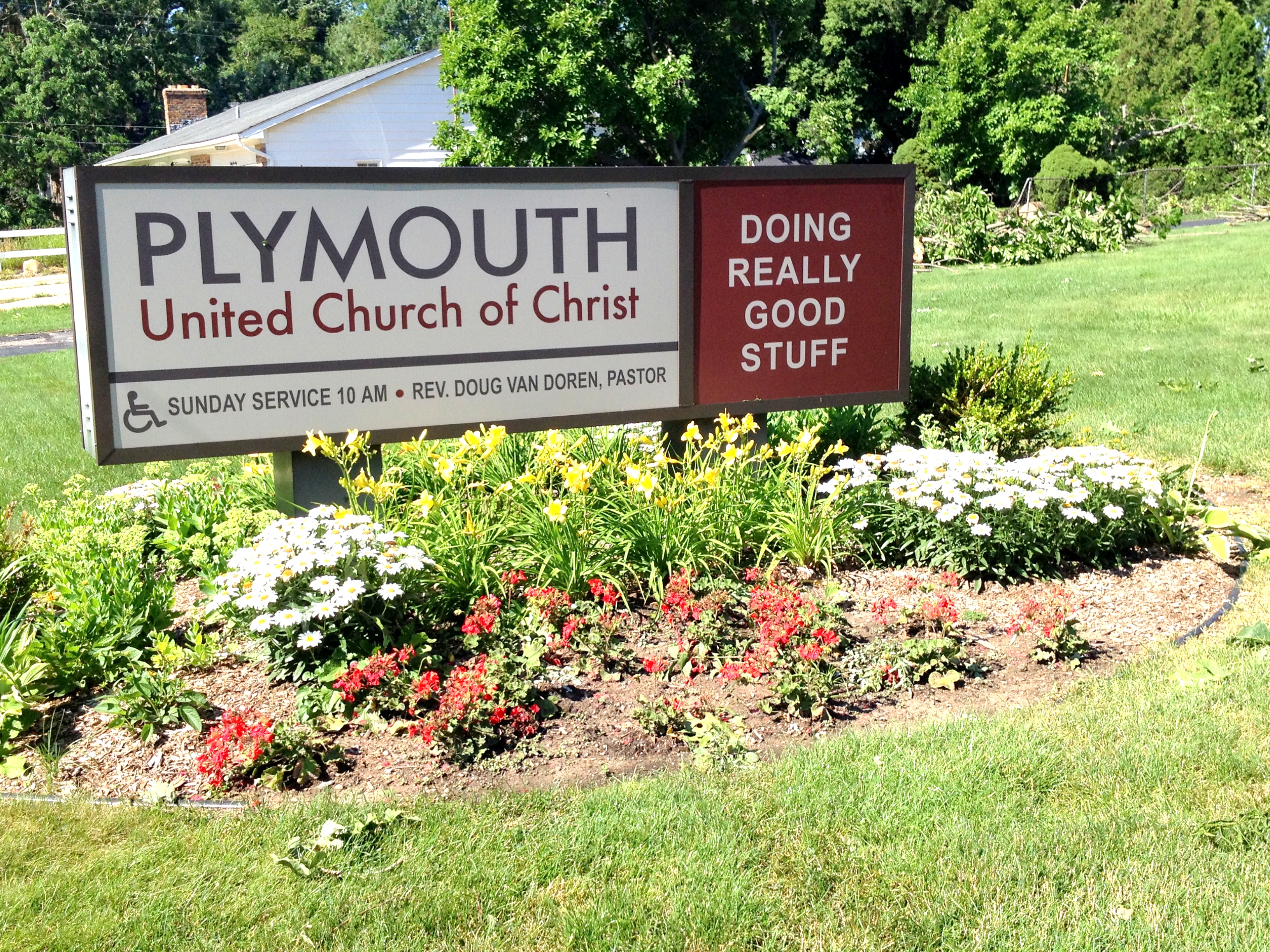 The church’s south-facing sanctuary roof turned out to be an excellent location for solar panels. Plus, it was also possible to install some solar panels now and add more later, if desired. Although not initially enthusiastic about the idea, the church’s trustees were pleasantly surprised and ultimately won over by the project’s feasibility and potential for savings on energy cost. Not only that, the church’s sign promotes the fact that Plymouth UCC is “doing really good stuff,” and the highly visible solar panels would be a public testament to their commitment to this motto.

The church decided to install a 10kW array of photovoltaic panels (American-made, Solar World premium panels), which offset approximately 25% of the church’s electricity use. They also increased the roof’s R value from 6 to 25 by adding insulation; this upgrade will not only make the sanctuary more comfortable, but is also expected to reduce the building’s natural gas heating costs by 25%.

In total, Plymouth UCC estimates it saves over $3,000 on energy. And because they funded the cost of the project upfront, through donations, the church benefits from these savings immediately.

How much did all of this cost?

The total cost of the roof replacement, including insulation and the solar power system was $150,000. A capital campaign was conducted to raise the funds. Over a six-week period, the committee did a great deal of outreach and education to inform Plymouth UCC’s congregation about the project and address their concerns. The committee held Q&A sessions, created flyers for worship service bulletins, did a mailing to homes, wrote newsletter articles and held a congregational meeting. The campaign culminated in a ‘Raise the Roof’ Sunday when the congregation was invited to make their two-year pledges. 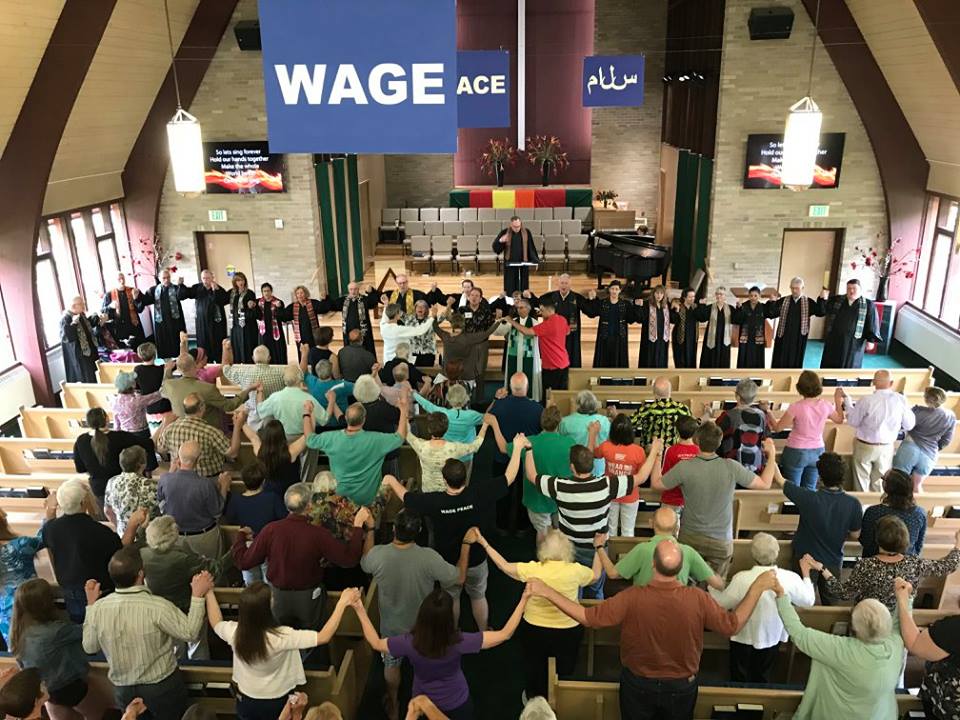 Melissa Anderson, Plymouth UCC’s church treasurer and a Task Force member of the committee, was amazed at the results. Members of Plymouth UCC’s 340-person congregation committed pledges that exceeded the goal by a whopping 25%! “Although the solar panels added to the total cost, they transformed a basic construction project into something that was truly exciting,” said Anderson. “The congregation was able to really get behind the idea of doing something innovative to improve our building and protect our earth. We studied the technology and science, and we’ve been won over by how feasible solar is!” The funds that remain after the project’s completion will be saved for future building upkeep.

The new roof and solar array were completed in the summer of 2015!

Installing solar energy was not Plymouth UCC’s first sustainable energy project. Over the past several years, they have undertaken a number of measures to become more sustainable:

You can call or email the church if you want to find out more about their research on and/or experience with planning a solar project, 616-455-4260 or [email protected]