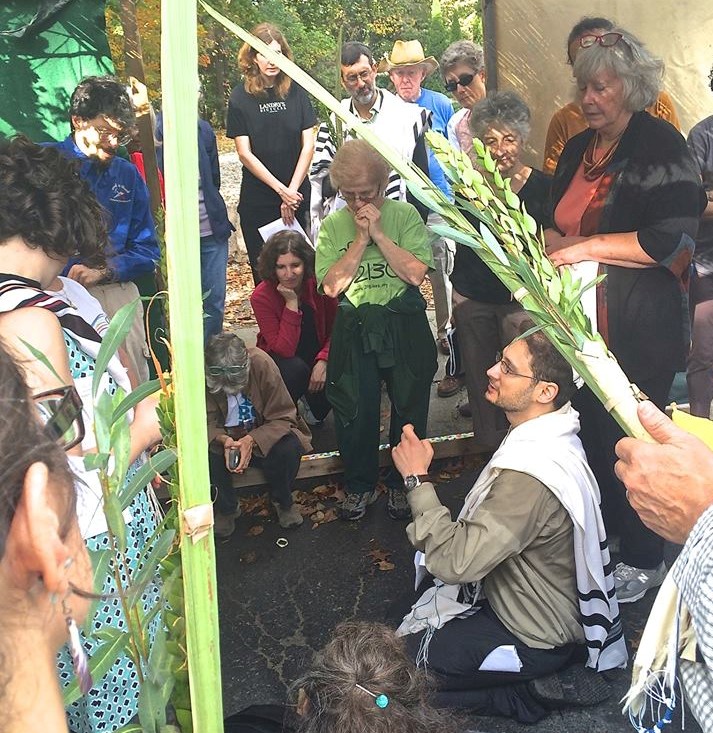 The issue at stake was not polar bears or penguins, but a mass global extinction, already ongoing and only accelerating with the Industrial Revolution and our addiction to fossil fuels. A boulder sat on my heart, blocking words from rising up to my throat. I wasn’t concerned about human survival-- we’re a highly adaptable species-- but I began to question: what does it mean to be human in an age of anthropogenic ecological annihilation? How do we deal with this level of evil?

After facilitating a discussion between young adults and some of the presenters, I waited until everyone else had spoken and eventually presented my dilemma: “I feel responsible to learn more and do something, but with one caveat. You have to give me something-- some emotional and spiritual resources to deal with this reality without losing myself completely in despair.”

Thus began my journey into what today some of us are calling Eco Chaplaincy: the work of providing emotional and spiritual support to communities trying to figure out how to live in a world ravaged by environmental devastation and climate disruption. While there are countless ways to do this, my training is in a process founded by the Buddhist teacher, ritualist, and activist Joanna Macy. Formerly known as “Grief and Empowerment Work,” it is today referred to as “Work That Reconnects,” which refers to the necessity of reconnecting with our souls, our bodies, our human family, the even bigger family of all of nature, the Earth herself, and G-d.

This work is for everyone, but it's especially for those who sense that, in addition to the technological and political changes that are needed to minimize the environmental catastrophes that we in the industrialized world have created, we need to cultivate even deeper spiritual changes.

In my work as an Eco Chaplain, I join communities in their struggles, help them reconnect to the ecological wisdom in their own traditions, explore the spiritual roots of our catastrophes, and partner with them to create rituals which will support them in moving from the natural responses of grief, rage, and fear to creativity, vision, gratitude, and responsibility.

The following is a snippet of one such process.

I had joined a group of community organizers near Boston, MA, who had been working to slow down the expansion of oil and gas pipelines for several years. At this point, a group of clergy had been arrested while blocking the way for laying of this pipeline. After participating in a support role for several months and consulting a number of leaders, I led an Interfaith Sukkot Worship and Protest near where a new Gas Compressor Station was being built. Not only was this project being built against the wishes of the local community, it was also dangerous. The facility-- being built to handle a highly combustible fuel-- was being sited across the street from a rock blasting quarry and there was no safety plan (required by law) in case of a leak or explosion. (What could possibly go wrong?!?)

I remember the worship protest more from recordings than personal recollection because it felt like a moment taken out of time. 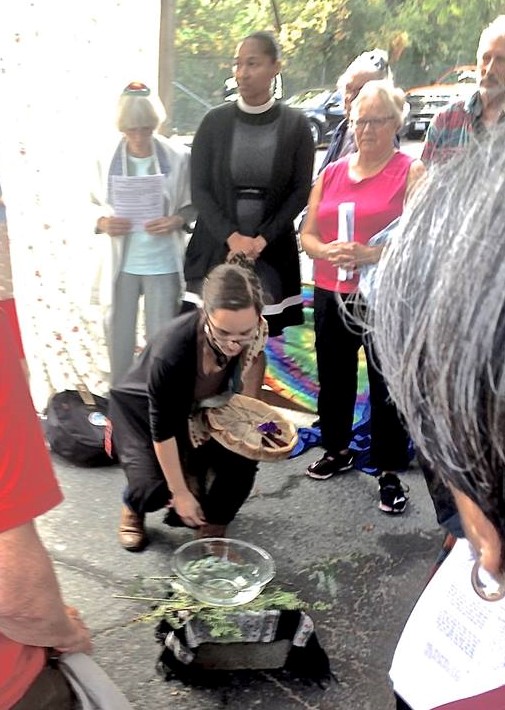 We gathered on an open corner across from the Compressor Station on one side, and the rock quarry on the other. We began setting up our Sukkah-- a Jewish, make-shift tent with the roof open enough to see the stars, representing humanity’s vulnerability in the world. The police soon interrupted us, proclaiming that the space was owned by the rock quarry, which was concerned about any injuries that could occur, should our tent of cloth and a few wooden boards collapse and injure one of us. (The irony of real dangers at stake seems to have bypassed their concern.)

The police officers' solution was that we move our Sukkah to the street. No danger there! Orange cones would be placed around our group to protect us from the huge compressed-gas carrying trucks. Bewildered by this irony but excited about the increased visibility that police support would bring, we moved the Sukkah into the street.

In our ritual, we publicly praised the Source of All Life, grieved and raged at the irresponsible endangerment of life, and prayed for community solidarity and the softening of the hearts of those with power to change course.

We opened with the Hebrew Psalms of Praise-- linking our actions to the offerings that were made in the ancient Jerusalem temple on behalf of all nations on each and every Sukkot for millennia. We expressed our solidarity with the Indigenous communities who were at that point gathering near Standing Rock, ND, to blockade an oil pipeline endangering their communities, and to the local Wampanoag, Mohegan, and Mohican tribes which had been taking care of God’s creation and the ecosystems which make our lives possible for thousands of years.

Then we passed around a simple bowl of water mixed with salt, and invited people to let their tears flow as well. Folks shared their personal struggles, fears for their families, and rage about the ecological catastrophes being set up in their neighborhood and around the world. We recited the traditional an Aramaic Jewish prayer of mourning, the Kaddish, and then a traditional Mohawk Water Song. More prayers were added, a few more songs, and people shared their visions for creating a healthier world.

We thanked the construction workers for their patience, making sure they knew that our work was not against them but the situation we all find ourselves in together as a community. I poured the Bowl of Tears onto the soil of the construction site, letting our tears join those of the Earth, and God’s ineffable tears.

As we finished our ritual and shared a few bites of food together while reflecting, I was moved by many things I did not and could not have planned... the irony of how close we were to being hit by the gigantic trucks carrying pressurized gas that entered the construction site during our prayers, long-time activists sharing that this was the first time they had a space to grieve, folks who were new to this work being moved by the chance to celebrate during a "protest," and my own realization that my prayer life would be forever different after taking this Direct Liturgical Action, that prayer without directly confronting injustice around me would never again feel wholly fulfilling.

If your community is interested in engaging with an Eco Chaplain, check out our Directory.